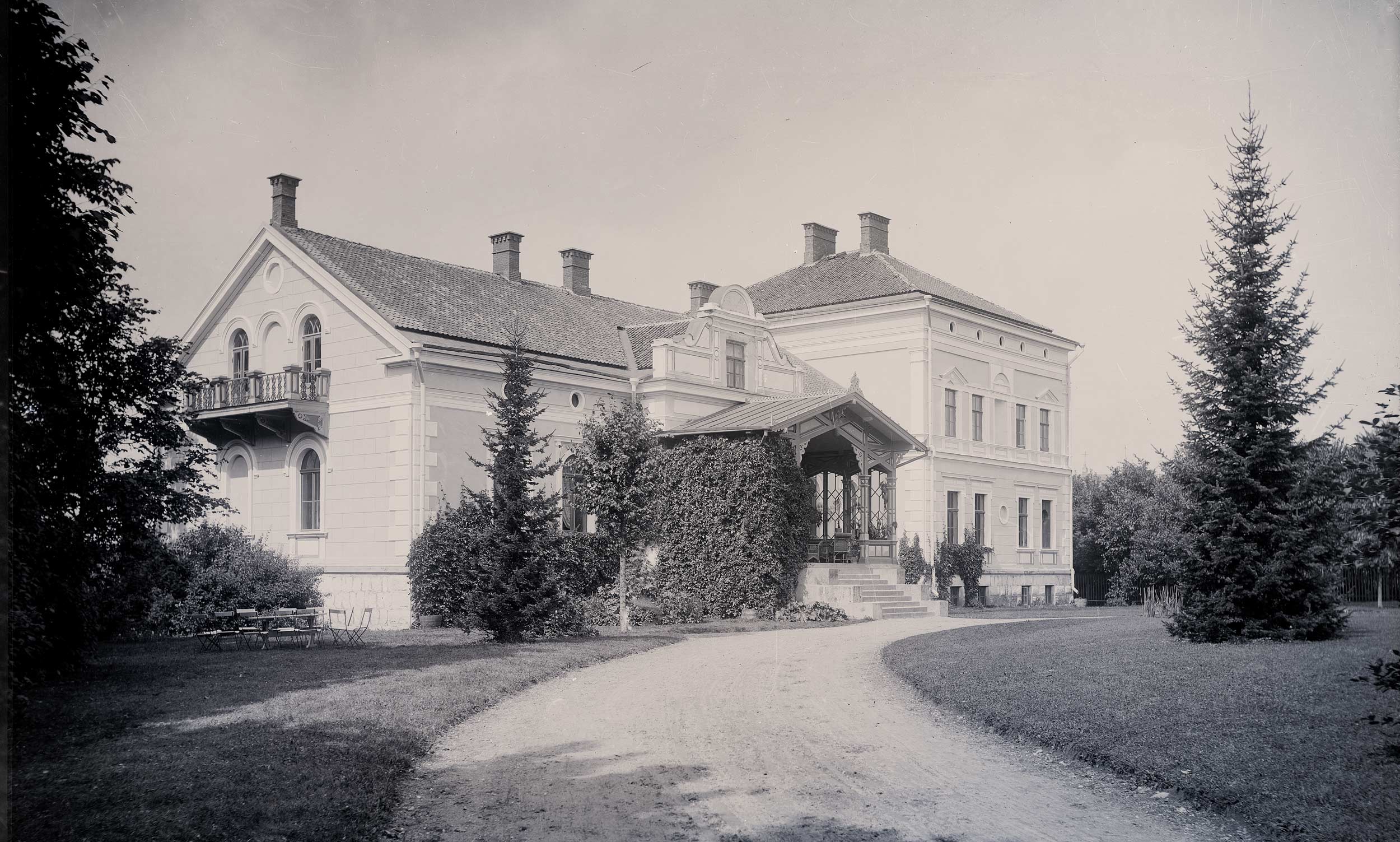 The Renaissance Revival-style manor house of Viljandi Manor was built in 1880 to the design by architect Friedrich Ferdinand Modi. Photograph from 1910, Estonian History Museum SA 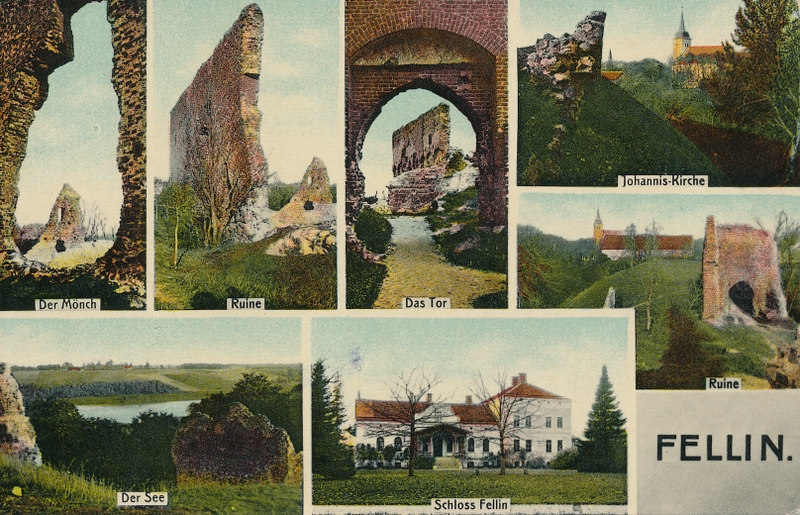 Together with the ruins of the ancient Order Castle, Viljandi Castle or Schloss Fellin was one of Viljandi's famous sights already in the Czarist era and featured on postcards of the time. Viljandi Museum

The history of Viljandi manor

The development and prosperity of Viljandi Manor (Schloß Fellin in German) began when King Gustav II Adolf of Sweden gave Viljandi with its surroundings to Jacob de la Gardie in 1624. The manor centre was built to the west of the medieval town, between the town and the former mighty Order Castle, which was lain in ruins in the wars between Sweden and Poland.

After the Great Northern War, which laid waste to the town of Viljandi and its surroundings, Russian Empress Elizabeth Petrovna gave Viljandi Manor to her cousin Maria. In 1749, a one-storey Baroque wooden main building was erected in the manor, which the Empress herself is said to have visited. The building was demolished in 1938; presently the site is occupied by the equestrian statue of General Johan Laidoner.

Manor owners from the noble family of Ungern-Sternbergs

In 1860 Viljandi Manor was bought by Baron August Paul Adolph von Ungern-Sternberg, who was also the owner of the manor houses of Erastvere and Vana-Piigandi. The Ungern-Sternbergs belonged among the oldest noble families in Estonia, Livonia, and Courland, and their branch related to Viljandi descended from the barons of Sweden. The Ungern-Sternbergs shaped the town of Viljandi with love for three generations and have greatly influenced the face of the town today.

After the purchase of Viljandi Manor, August Paul Adolph allocated a plot from his lands for the construction of a rural church. Next to the St John’s Church, also called the German church at the time, was erected a new church, St. Paul’s Church, called the Estonian church. The baron’s successors also belonged among the members of the congregation until they left Estonia. 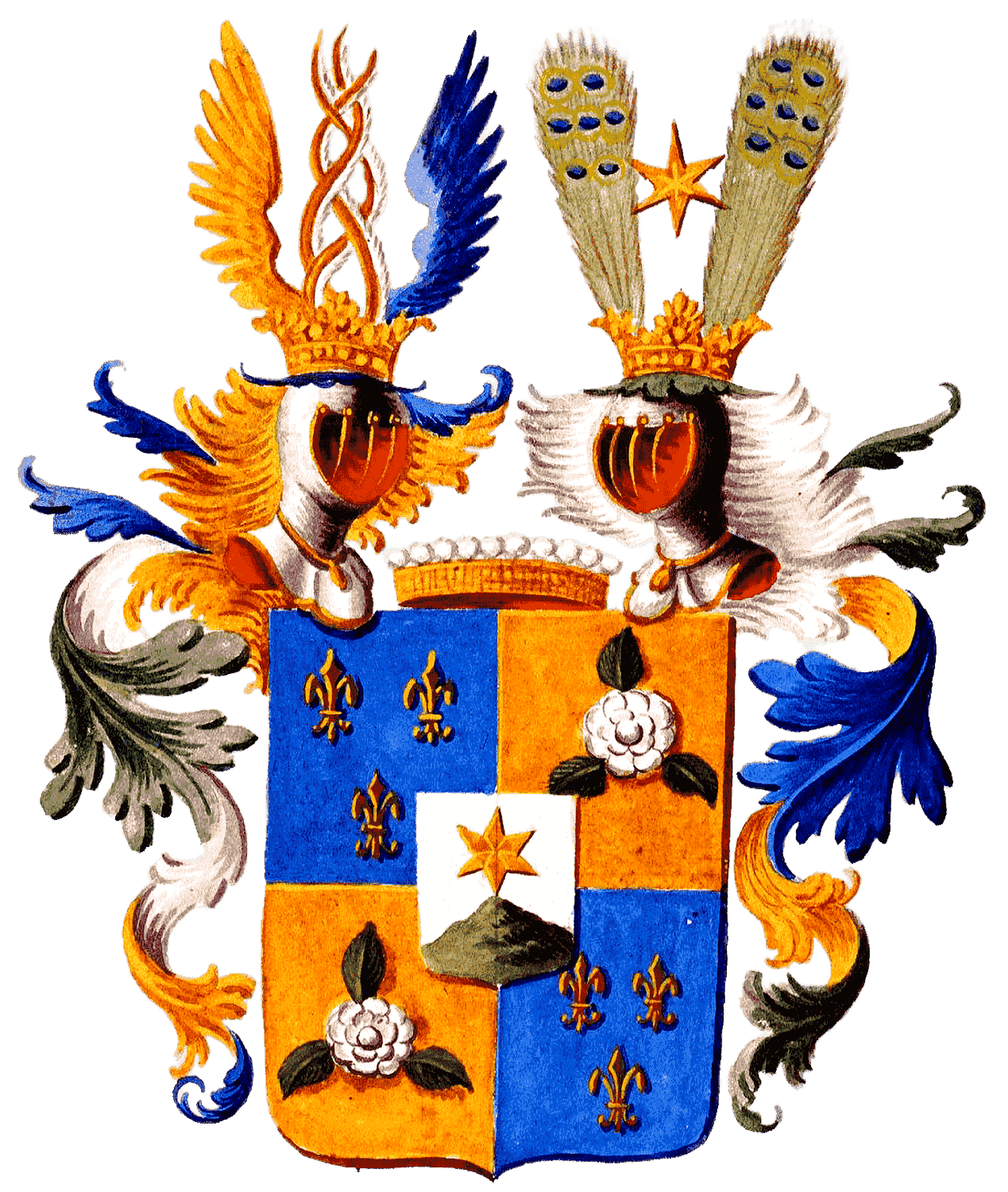 The coat of arms of Ungern-Sternbergs from 1653. The National Archives of Estonia 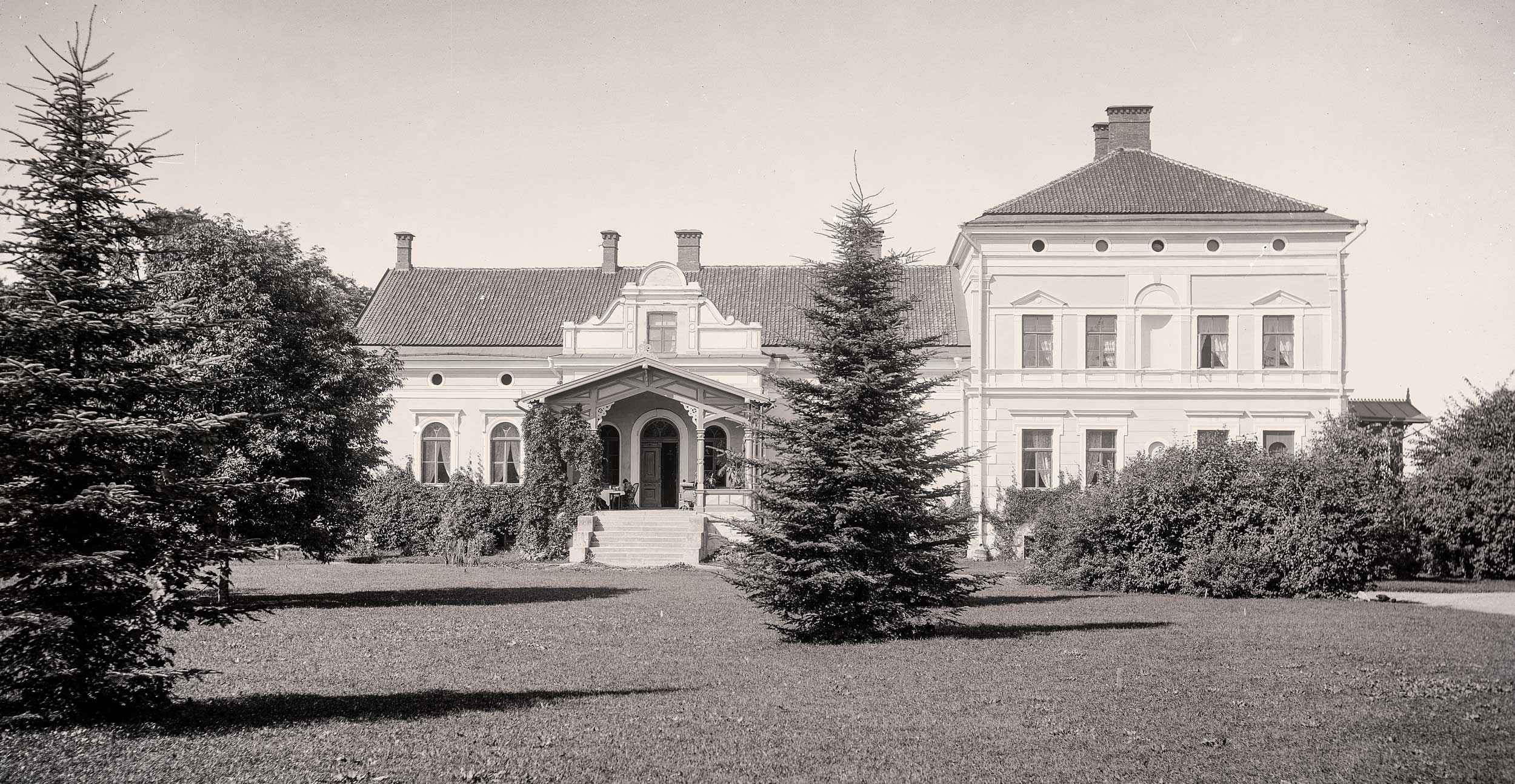 Baron Oswald von Ungern-Sternberg, who governed Viljandi Manor until 1907, made sure that there was plenty of greenery around the beautiful castle. Photograph from 1910, Estonian History Museum SA

Right after the wedding the planning of a new manor house in Viljandi started. The baron's firstborn, daughter Alexandrine Alice Emily was born in the old building of Fellin Manor in 1878. Alexandrine (later von Mensenkampff) writes in her memories that she was a great disappointment as her parents expected to have a son first. But Alexandrine’s energetic and active, somewhat boyish nature helped the parents to come to terms with that “shortfall”: her playmates were horses and dogs, she spent most of her days outdoors and in the garden, and she felt particularly proud when her father took her on his business trips. On these trips, the father introduced his daughter to the secrets of agriculture and they discussed business plans together.

The new Renaissance Revival-style stone manor house was completed in 1880 to the design by the architect Friedrich Ferdinand Modi. According to contemporaries, the manor house was beautiful, as was the surrounding park with its abundant greenery. 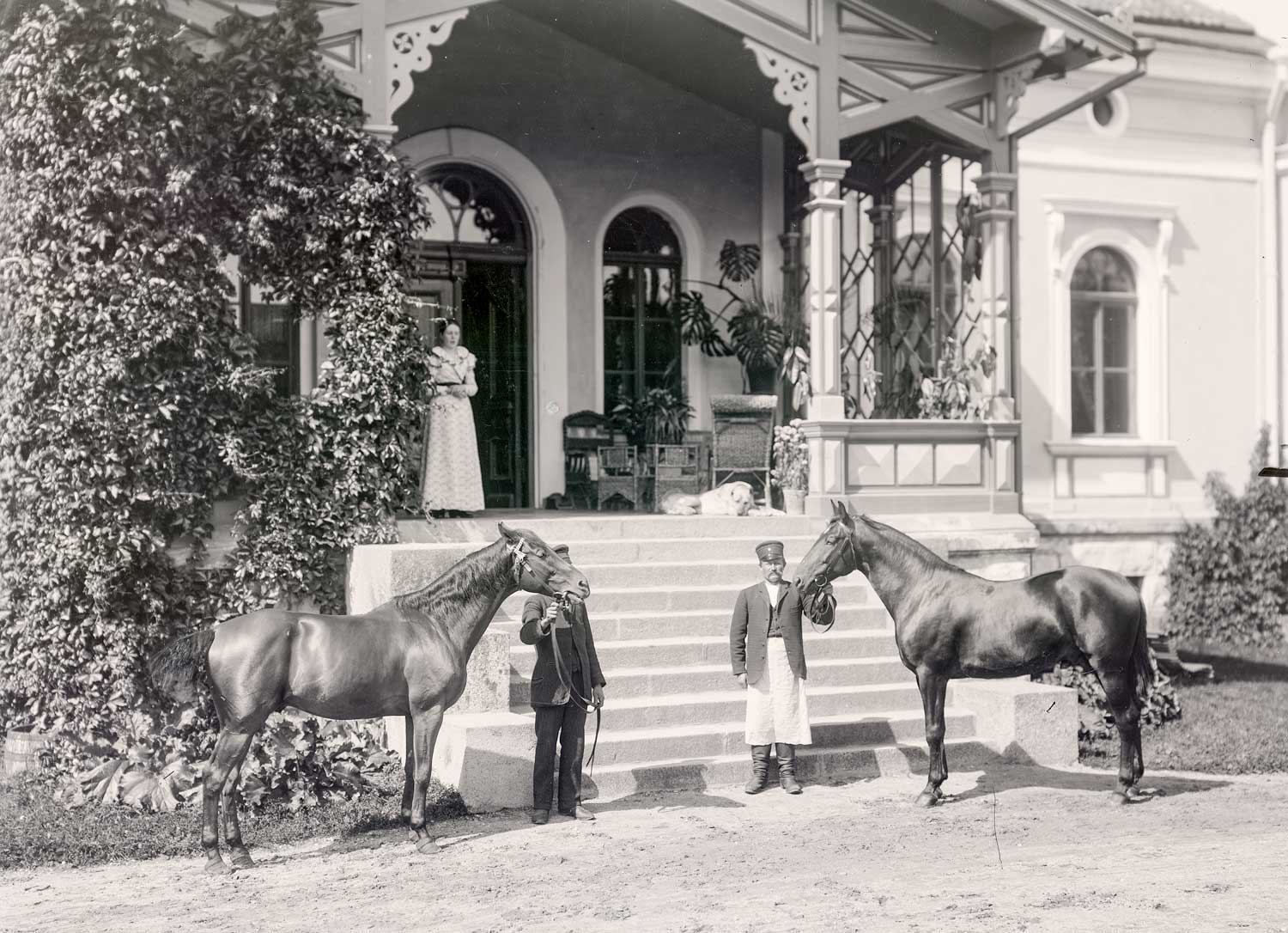 Alexandrine has written in her childhood memories that the favourite place of the castle people in the summer was the spacious porch, where they worked, read, ate lunch, drank coffee. It was also where her playground with a swinghorse and dolls was. A large Venetian chandelier hung from the ceiling of the hall with beautiful polished elmwood doors, and on the walls there were many works of art, including copies of the paintings by Murillo, “The Infant St John with a Lamb” and “The Infant Christ and Saint John the Baptist with a Shell”, some Italian and Dutch sea paintings and a large winter landscape. In the corner of the room, on the dressing table stood a Goethe bust, that the child had dropped during the move, thus damaging the bust’s nose. There were also several paintings on the walls of small drawing room, including two copies of Rembrandt. The mother's writing room was also on the same floor, with lots of photos on the walls and a marble relief by Weizenberg of her parents. In the big bedroom of the parents there was an interesting mirrored wardrobe, exciting for the child to explore, because her mother used to hide Christmas presents in there. The child's room, the maid's room, the cooking and dining room, the gentlemen's salon, the father's writing room, the buffet room and the back porch were all on the same floor. A large wide staircase led to the top floor, where there were seven guest rooms and a large bright loft for drying laundry.

Another steep staircase led to the top attic, where old bottles, boxes and crates were stored, which the child happily used for building doll houses and stables. Alexandrine loved to go there to look out and far into the wild from the small round windows.

On the basement floor there were several dry cellars, a servants’ room, a handicraft room and a laundry room.

In 1900 a son Heinrich (Heinz) Oswald Paul Richard was born to the couple, but could spend only seven years with his father. Baron Oswald Paul Conrad Constantin died in 1907 and was buried in the family cemetery opposite the castle. During the digging of his grave, the remains of the former building were discovered – this was the place where both the Catholic chapel of the Order and the manor house of the de la Gardie family once stood.

The last owner of Viljandi Manor from the Ungern-Sternberg family, Heinz, was a great aviation enthusiast who paved the way for the Estonian private aviation in the early 1930s and transformed his hometown Viljandi into the capital of Estonian aviation for a few years. 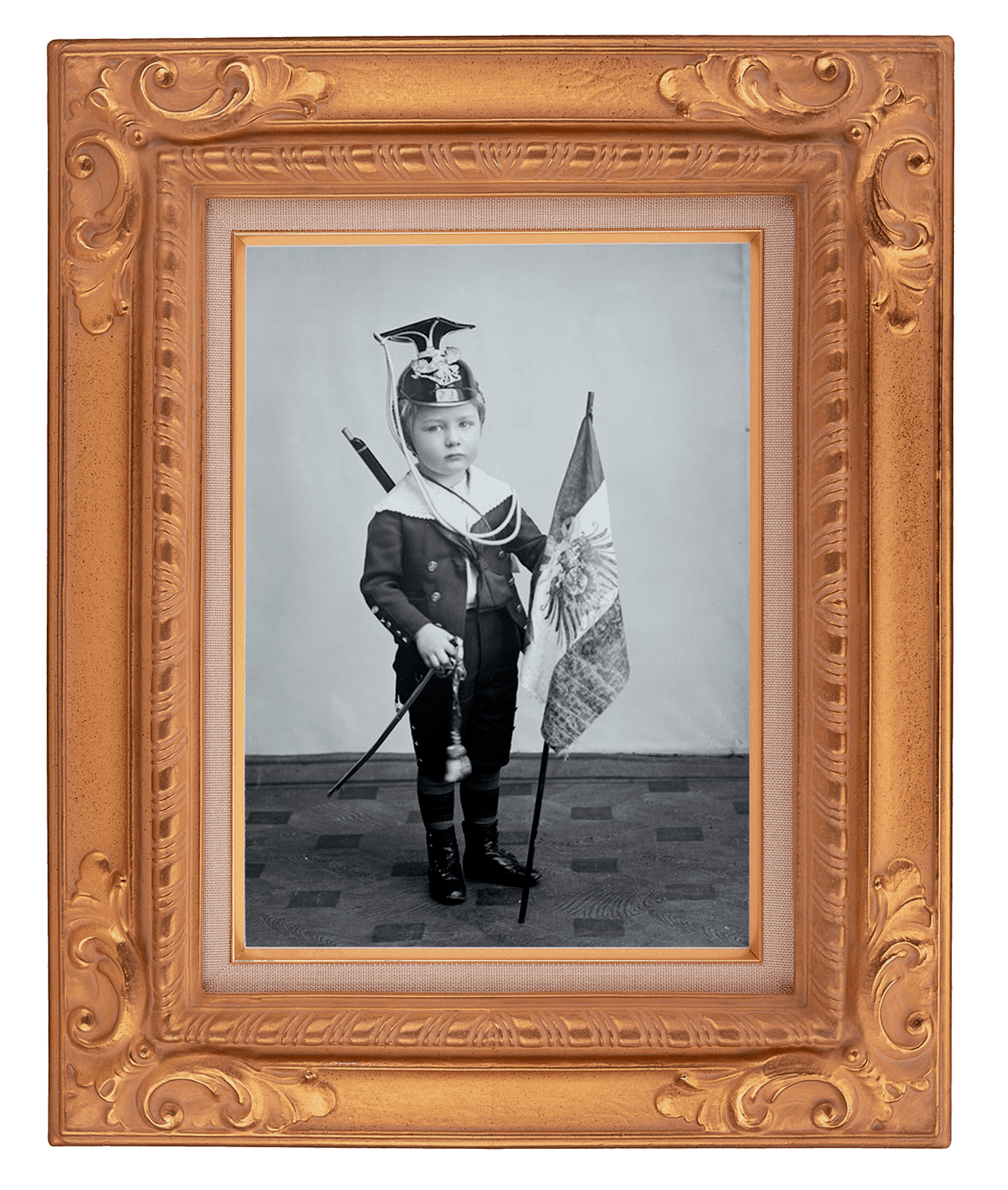 The last Ungern-Sternberg owner of Viljandi Manor, master Heinz (1900-1945) in Viljandi as a child. Photograph from 1904, Jaan Riet, Viljandi Museum

A monoplane ES-AAC built in the mechanical workshop of Heinz von Ungern-Sternberg. Photograph from 1934, Viljandi Museum

Pilots Captain Döring and Ungern-Sternberg in Viljandi after a 5000 km flight around Europe in the plane ES-UST. Photograph from 1931, Jaan Riet, National Archives

Airplanes and pilots who took part in the campaign for popularising aviation on the ice of Lake Viljandi. Photograph from 1931, Jaan Riet, National Archives 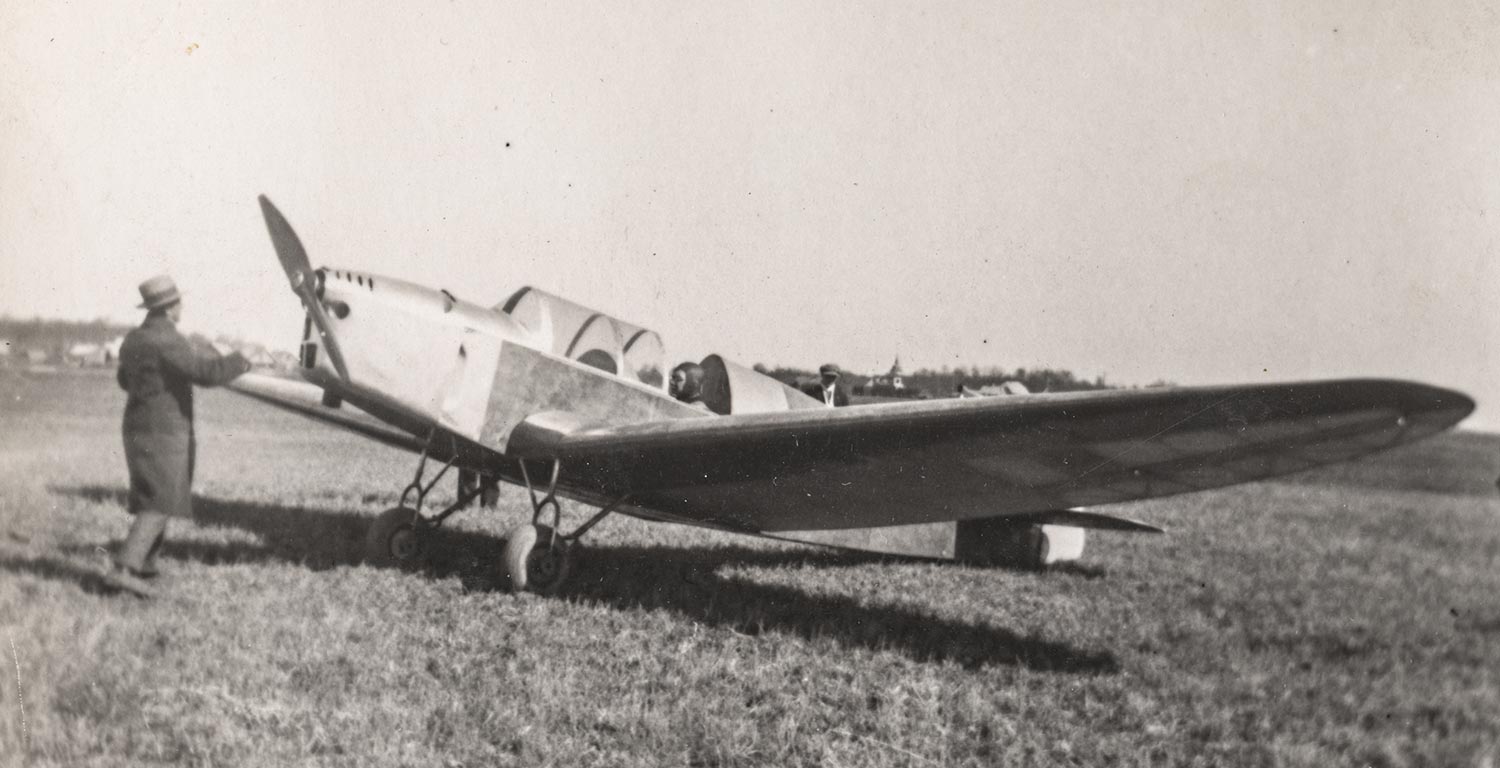 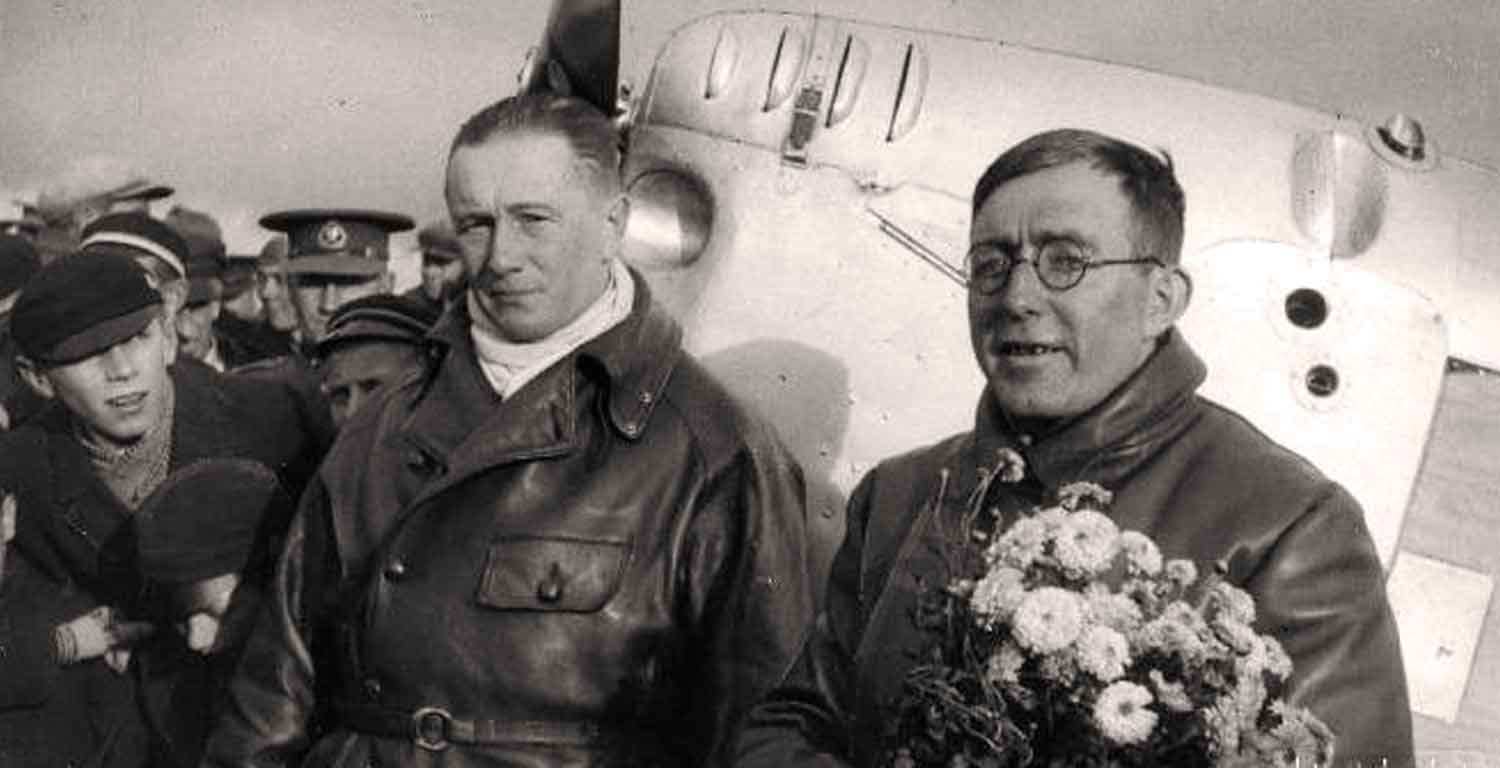 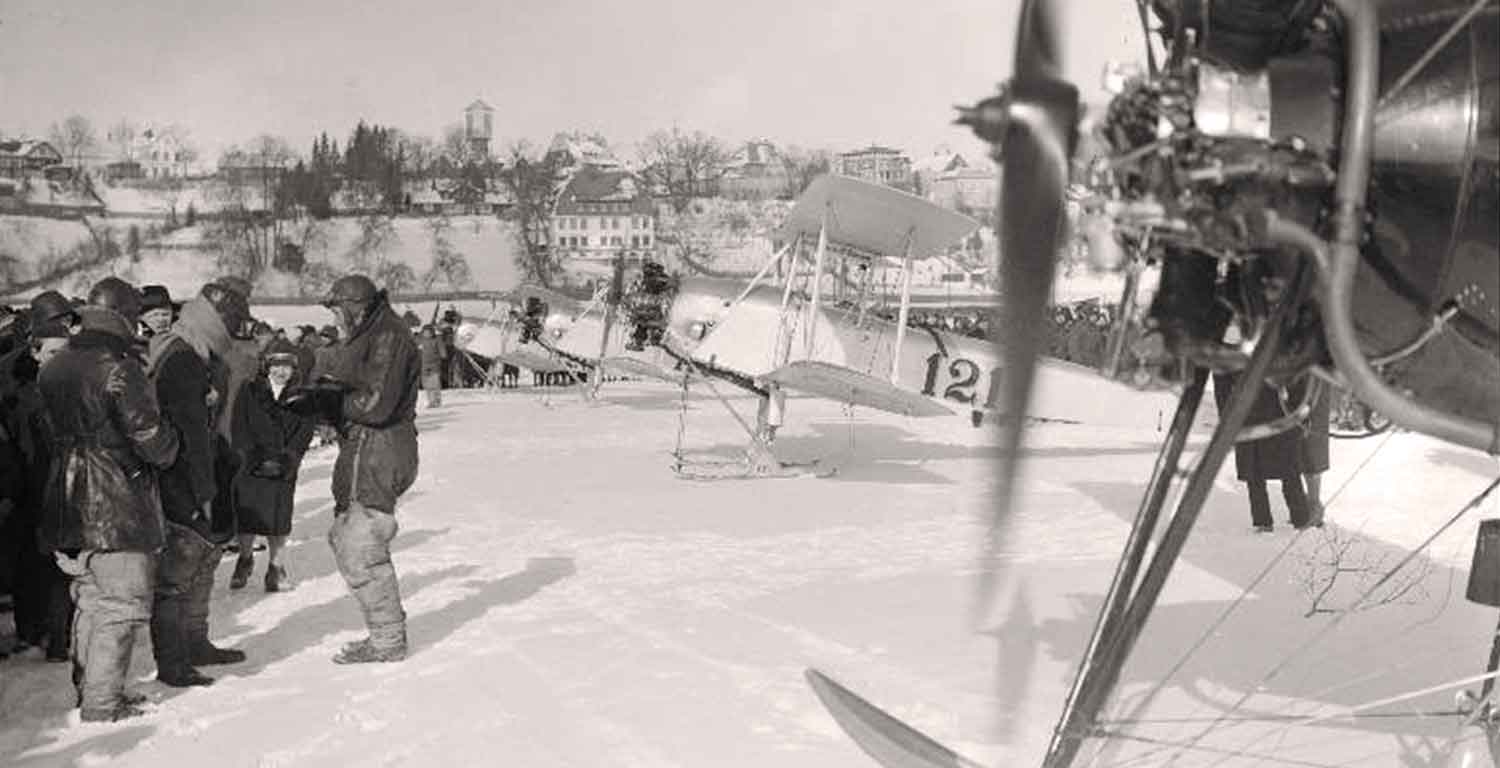 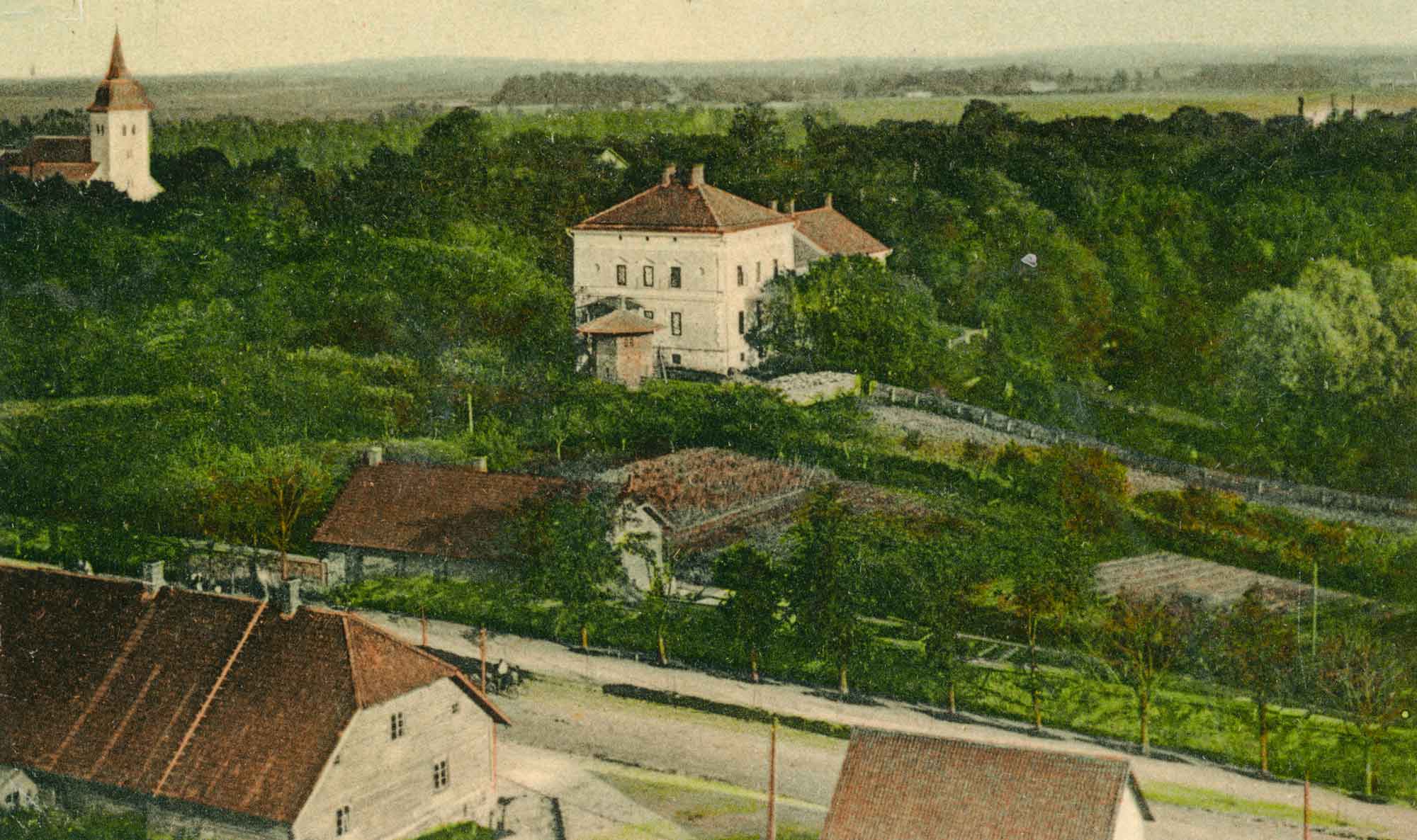 A View of Viljandi: Vaksali Street, the main building and garden of the manor and St John’s Church. Postcard from 1910, publisher E. Ring, Viljandi Museum

The castle falls into the hands of the Estonian state

At the outbreak of the War of Independence Heinz joined the Baltic-German National Defence Squad of Viljandi – Felliner Heimatschutz, formed on November 20, 1918, which was soon joined with a similar force in Tartu and later with the Baltic Battalion, where he served until July 25, 1919.

Although the manor houses were expropriated by the land reform of 1919, most of the buildings of Viljandi Manor and the nearby sawmill remained in the possession of the Ungern-Sternberg family. In 1919, the Republic of Estonia nationalised Viljandi Manor, its lands were merged with the town of Viljandi, and the manor house was utilised by the state. In the town, at Mõisa tee 12 (nowadays Hariduse 12), the Ungern-Sternbergs also had a beer factory and Heinz Ungern-Sternberg aircraft factory and later also a mechanical workshop, where buses were built.

Ungern-Sternbergs of Viljandi, including Heinz, moved to Germany among the migrants already in 1939.

The manor house in the winds of time 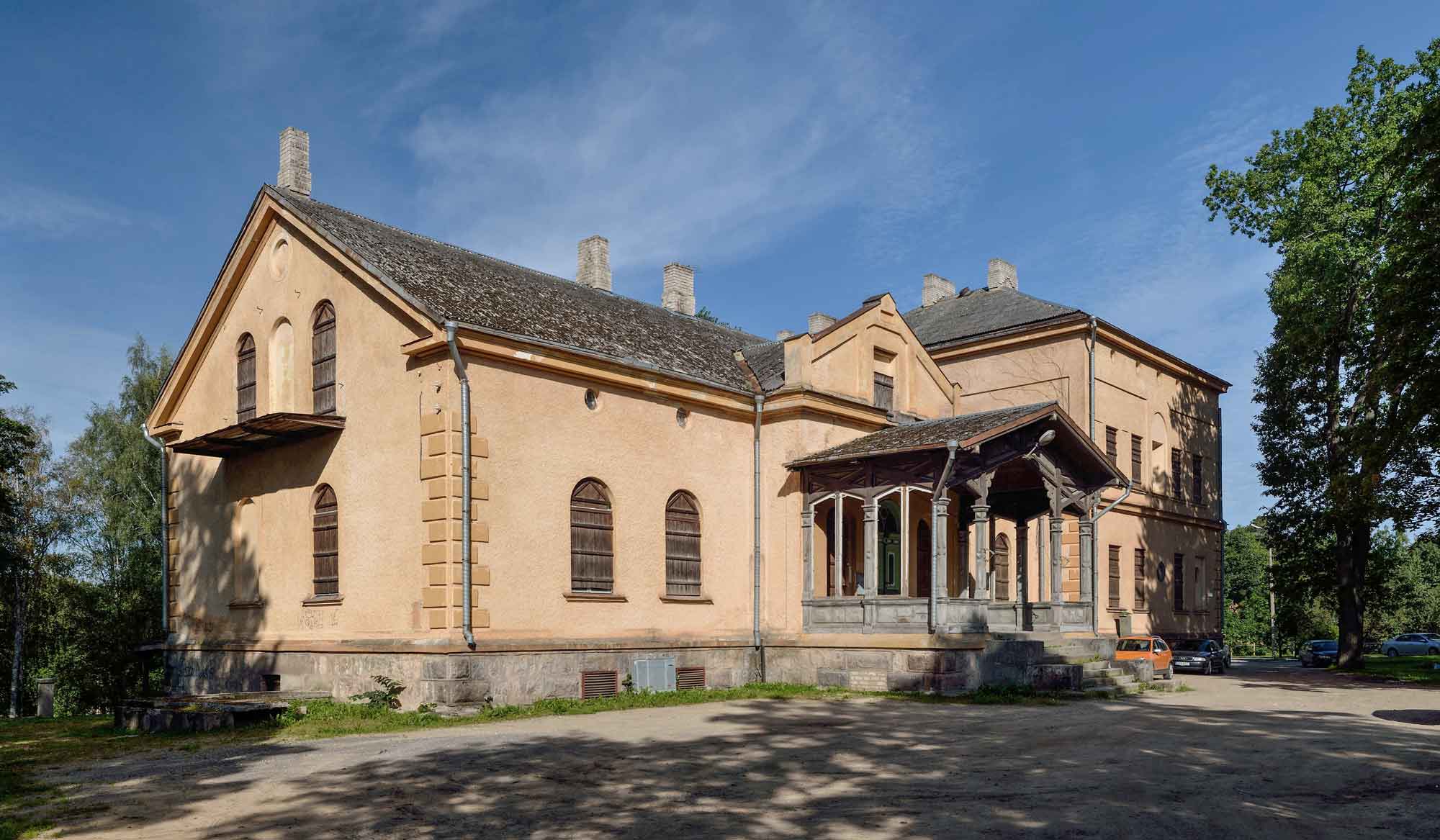 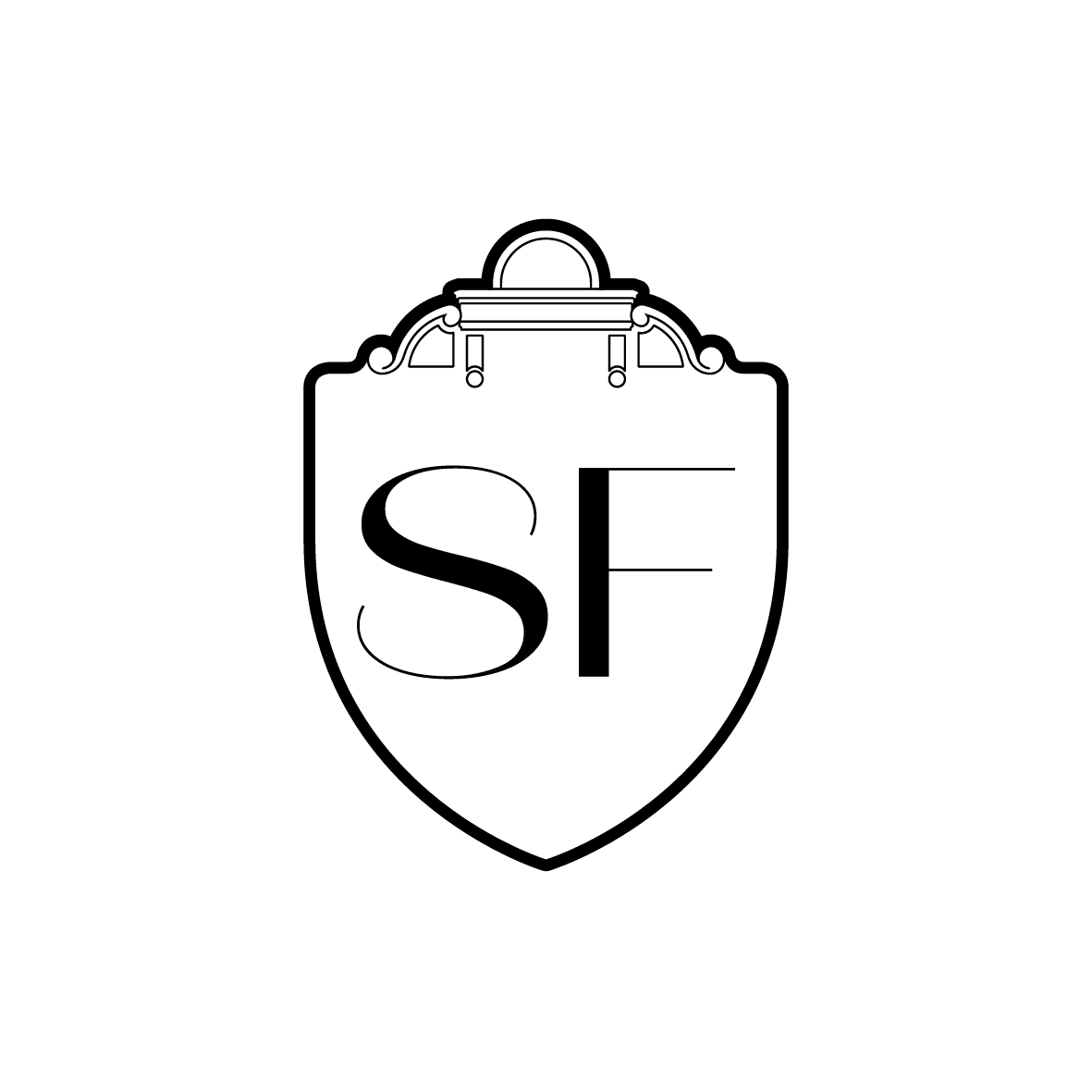 Future as a boutique hotel

In 2018, the main building of Viljandi Manor was bought by an entrepreneur Viktor Siilats, whose father’s side of the family originates from Viljandi. In cooperation with the Heritage Conservation Board, the manor building needing a thorough restoration was restored in order to bring back its former glory. The unique boutique hotel opened in summer 2021 in Viljandi Castle or Schloss Fellin has 17 luxury rooms, spa, party and conference services and a gourmet restaurant.

More on the history of the Manor: